Turnout on islands for presidential election and referendum has been low

about 4 hours ago
Lorna Siggins 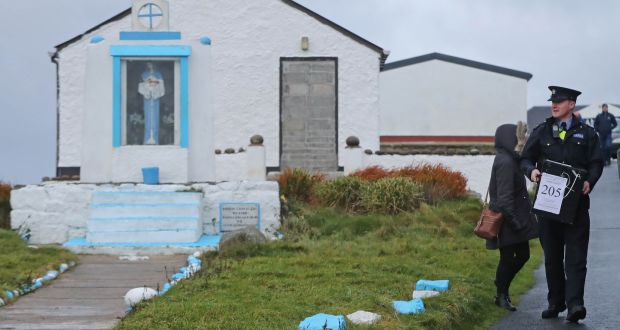 Turnout has been low and slow during the day on 12 west coast islands where voting in the presidential election and blasphemy referendum has been taking place.

Polling station staff on Mayo’s Clare island reported a 30 per cent turnout by late afternoon, while four Galway islands reflected a similar pattern in the early part of the day.

It looks like most voters stayed away in disgust at President Michael D. Higgins who led an extravagant presidency over seven years trousering a a couple of millions for himself out of the 55 millions that his presidency cost the taxpayer in total.

People all across Ireland are dismayed at the profligate spending of our supposed socialist president who has been found out not to practice what he preached but rather to amass wealth to himself living in an incredible state of luxury at the people’s expense.

Not even the Queen of England spent so much on her poodle as Higgins has on his dogs. His jetset lifestyle in the government Learjet was another huge disappointment for his erstwhile followers.  He has a wardrobe of suits costing 4000 each, charvet shirts and ties like the late Charles J Haughey, while he also pursued a second career as a landlord of a house he bought cheap in Galway during the recession and while he was president.

It’s no wonder these islanders, usually great voters, have stayed away from Ireland’s presidential polls in sheer disgust as the stench arises from Aras An Uachtarain. And even if Higgins survives his halo has list its sheen and is in fact severely dented.

Polls open on mainland Ireland in a few hours time at 7.00 AM in the morning when it is hoped that turnout might be better. Win or lose President Michael D Higgins – and the entire Establishment that has backed him  of all media and all parties outside of Sinn Fein – will be severely questioned by an electorate demanding more honesty in Ireland’s public affairs.

One thought on “ELECTION TURNOUT DOWN AT 30% AS HIGGINS TROUSERS MILLIONS.”